Skip to content
HomeDeep LearningDo Pretrained Embeddings Give You The Extra Edge?

This is a repost from my kernel at Kaggle, which has received several positive responses from the community that it’s helpful to them. This is one of my kernels that tackles the interesting Toxic Comment Classification Challenge at Kaggle, which aims to identify and classify toxic online comments.

Perhaps it’s a good idea to briefly step in the world of word embeddings and see what’s the difference between Word2Vec, GLOVE and Fasttext.

Embeddings generally represent geometrical encodings of words based on how frequently appear together in a text corpus. Various implementations of word embeddings described below differs in the way as how they are constructed.

The main idea behind it is that you train a model on the context on each word, so similar words will have similar numerical representations.

We feed the ‘cat’ into the NN through an embedding layer initialized with random weights, and pass it through the softmax layer with ultimate aim of predicting ‘purr’. The optimization method such as SGD minimize the loss function “(target word | context words)” which seeks to minimize the loss of predicting the target words given the context words. If we do this with enough epochs, the weights in the embedding layer would eventually represent the vocabulary of word vectors, which is the “coordinates” of the words in this geometric vector space. 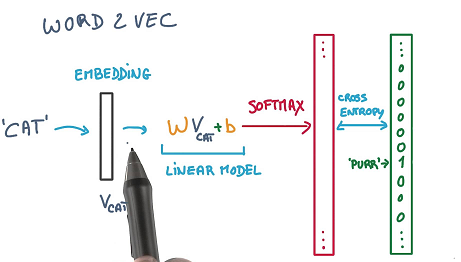 The above example assumes the skip-gram model. For the Continuous bag of words(CBOW), we would basically be predicting a word given the context.

GLOVE works similarly as Word2Vec. While you can see above that Word2Vec is a “predictive” model that predicts context given word, GLOVE learns by constructing a co-occurrence matrix (words X context) that basically count how frequently a word appears in a context. Since it’s going to be a gigantic matrix, we factorize this matrix to achieve a lower-dimension representation. There’s a lot of details that goes in GLOVE but that’s the rough idea.

FastText is quite different from the above 2 embeddings. While Word2Vec and GLOVE treats each word as the smallest unit to train on, FastText uses n-gram characters as the smallest unit. For example, the word vector ,”apple”, could be broken down into separate word vectors units as “ap”,”app”,”ple”. The biggest benefit of using FastText is that it generate better word embeddings for rare words, or even words not seen during training because the n-gram character vectors are shared with other words. This is something that Word2Vec and GLOVE cannot achieve.

Let’s start off with the usual importing pandas, etc

Some preprocessing steps that we have taken in my earlier kernel.

Since we are going to evaluate a few word embeddings, let’s define a function so that we can run our experiment properly. I’m going to put some comments in this function below for better intuitions.

Note that there are quite a few GLOVE embeddings in Kaggle datasets, and I feel that it would be more applicable to use the one that was trained based on Twitter text. Since the comments in our dataset consists of casual, user-generated short message, the semantics used might be very similar. Hence, we might be able to capture the essence and use it to produce a good accurate score.

Similarly, I have used the Word2Vec embeddings which has been trained using Google Negative News text corpus, hoping that it’s negative words can work better in our “toxic” context.

The function would return a new embedding matrix that has the loaded weights from the pretrained embeddings for the common words we have, and randomly initialized numbers that has the same mean and standard deviation for the rest of the weights in this matrix.

Let’s move on and load our first embeddings from Word2Vec.

With the embedding weights, we can proceed to build a LSTM layer. The whole architecture is pretty much the same as the previous one I have done in the earlier kernel here, except that I have turned the LSTM into a bidirectional one, and added a dropout factor to it.

We start off with defining our input layer. By indicating an empty space after comma, we are telling Keras to infer the number automatically.

How does Bidirectional LSTM work?

Imagine that the LSTM is split between 2 hidden states for each time step. As the sequence of words is being feed into the LSTM in a forward fashion, there’s another reverse sequence that is feeding to the different hidden state at the same time. You might noticed later at the model summary that the output dimension of LSTM layer has doubled to 120 because 60 dimensions are used for forward, and another 60 are used for reverse.

We are also introducing 2 more new mechanisms in this notebook: LSTM Drop out and recurrent drop out.

Why are we using dropout? You might have noticed that it’s easy for LSTM to overfit, and in my previous notebook, overfitting problem starts to surface in just 2 epochs! Drop out is not something new to most of us, and these mechanisms applies the same dropout principles in a LSTM context.

These mechanisms could be set via the “dropout” and “recurrent_dropout” parameters respectively. Please ignore the colors in the picture.

Okay! With the LSTM behind us, we’ll feed the output into the rest of the layers which we have done so in the previous kernel.

It’s a good idea to see the whole architecture of the network before training as you wouldn’t want to waste your precious time training on the wrong set-up.

Finally, we fire off the training process by aiming to run for 4 epochs with a batch size of 32. We save the training and validation loss in a variable so we can take a look and see if there’s overfitting.

The training of the model will take longer than what Kaggle kenel allows. I have pre-run it, and this is the result that you should roughly see

The result isn’t too shabby but it’s about the same as the baseline model which we train our own embedding. What about the other pretrained embeddings such as GLOVE and FastText? Let’s try them out.

Over here, we are not going to repeat the whole process again. If you are running the notebook yourself, simply replace

to load the pretrained embedding from the different sources. For the sake of our benchmarking. I have pre-run it and collected all the results.

And of course, the same baseline model which doesn’t use any pretrained embeddings, taken straight from the previous kenel except that we ran for 4 epochs:

It’s easier if we plot the losses into graphs.

What about the rest? Let’s plot all the training/validation loss plots out to compare side by side.

With all the losses laid out, it’s easy to see which the best option is. While it appears that GLOVE still some room to go before it overfits, the loss is high compared to the rest. On the other hand, Word2Vec and FastText starts to overfit at the 4rd and 3rd epochs respectively. So which one would you pick as the winner? In my opinion, still the baseline model.

So what went wrong? Aren’t pretrained embeddings supposed to improve because it’s trained with billions of words from tons of feature-rich corpus?

Although building your own embedding takes a longer time, it might be worthwhile because it builds specifically for your context.

And that finally wraps up this kernel! I hope someone learnt something in this kernel. If you spot an error, feel free to let me know by commenting below.

Thanks for reading and good luck in the competition!